1. Vikings were very clean people (at least by comparison to other people at the time!).

2. A Viking's most treasured weapon was his sword.  They were handed down generations via inheritance, were often named and could be inscribed with runes by talented smiths to magically increase their power.

4. The nursery rhyme 'London Bridge is falling down' could be linked to a Viking named Olaf the Stout who fixed cables from longships to the bridge and pulled it into the Thames.

6. Onion soup was fed to the injured to identify injuries that were beyond treating!  Stinky!

7. Vikings played Piggy in the Middle with rolled up bearskins.

8. Most Viking boots were made of goatskin.

9. Buttons hadn't been invented yet so toggles, clasps and brooches were used.

10. Some Vikings attached thrusting spikes to the centre of their shields to adapt them for offence as well as defence.

11. Everybody attended a big meeting called (wait for it) The Thing!

12. There were no toilets on longships!

13. Vikings navigated using bearing dials; astronomy; lodestones, sunstones and by releasing captured birds when they thought they were near land.

14. Erik the Red was so violent even fellow Vikings objected; exiling him from both Norway and Iceland.

15. Vikings believed in two groups of Gods - the Aesir (pronounced "Eye-Ear") and the Vanir.

16. Thursday is named after Thor, God of Thunder.

17. Byelaws in England are called that because in Viking times 'by' meant village.  So Grimsby was a village where a Viking called Grim lived and Kirkby is the village with the church.

19. On average, Vikings would live to around their forties.

20. Children would be considered adults by the age of twelve!

21. The Viking diet was good and varied, accounting for their height not dissimilar to our own.

22. There were three main classes in Viking society: Jarls (earls) who were noblemen; Karls (average, free Vikings) and Thralls who were slaves.

23. King Cnut (Canute) was the first Viking king of England.

24. Viking runes were shaped using angular strokes for ease when carving into wood.

25. Vikings' teeth were ground down by the grit in their bread.

26. Many trades had workshops with three or four craftsmen of different ages and skill working to become Master Craftsmen.

27. The famous Jelling Stone was raised by King Harald Bluetooth in the 960s.

28. Norse housewives' rights were better than those of some women in later periods.  They held the keys to the longhouse; commanded slaves in the master's absence and could divorce for reasons like their husbands showing too much chest hair!

29. Viking houses in England were made of wattle (which means wooden sticks).

30. There were two meals a day - day meal and night meal!

31. Prow carpenters for longboats were paid well, acknowledging their great art which is evidence of Viking sensibilities sometimes forgotten.

32. Silver armbands were popular amongst the rich.

33. Battles started at a distance with projectiles like arrows and rocks from slings.

34. Ordeals were a test of bravery to sort out arguments by picking stones out of hot water or carrying hot iron for nine paces.

36.  Norse boats were very well made and were often named.

37. A baldric was a shoulder strap to carry a sword.

38. The Danegeld was an example of Viking extortion; promising "protection" for gold.

39. The historical Macbeth submitted to Viking King Cnut in 1031 along with Malcolm and Iehmarc.

40. Vikings were great traders, taking bronze scales with them on trips to weigh money and metals.

41. Vikings wanted to die in battle in order to make it to Valhalla - the Norse afterlife for brave fallen warriors.

42. In the year 1000 at the Iceland Althing, King Olaf ensured the peaceful adoption of Christianity by Vikings.  He was later sainted for it by the Roman Catholic Church.

43. Viking women died earlier than men due to the dangers of childbirth, usually by the age of 35.

44. Fish was eaten throughout the year and smoked in roofs for preservation with herring, haddock, cod and trout being common.

45.  In 939AD Vikings from Dublin conquered the whole country and England was as one.

47. In winter, Vikings brought their cattle and poultry into their longhouse (which they could share with children, slaves and their own parents)!

48. Vikings believed that good health came from observing their Norse religion and that medicine angered the gods - which explained the Fall of Rome.

49. Blood sports were popular including bear baiting and horse fighting or for poorer folk cock fighting.

50. Vikings grew the flax plant for spinning into linen.

51. Norsemen made torches from marsh grass called lyssiv for lighting the home.

53. Although swords were double-edged, the seax (a knife worn by all free Vikings) were single bladed.

55. Vikings believed in fate and thought the three Norns ruled over past, present and future.

56. The Danelaw was the part of England where Danish (or Viking) law held sway.

57. Bone combs were stronger than antler ones.

60. Vikings took scary figureheads off their longship prows when sailing in friendly waters so as not to offend the gods.

61. Buckets must have held a lot more significance than now and there were probably several wooden ones about the house.

62. The famous 12th Century Lewis Chessmen are carved from Walrus Ivory to look like Vikings but we can't be certain that Vikings played Chess.  Hnefatafl is a similarly strategic game they enjoyed though.

63. If chainmail or iron helms were too expensive, some Vikings opted for padded leather tunics and leather helmets.

64. Before (and sometimes even after) Christianity took hold, Viking chieftains were sent into the afterlife on a burning longship with many of his possessions around him.

65. Wielded overhead at maximum velocity, Dane Axes were capable of cutting through iron helmets and down through a skull, coming to rest at around about the teeth!

66. Vikings may have travelled by camel on trading expeditions to far flung places.

67. Writing gave a man power.  Runes were believed to have come from Odin himself when he sacrificed himself on Yggdrasil - the world tree and wrested them from the underworld, tearing them from the roots of the tree.

68. Great trading settlements included Jorvik; Novgorod and Kiev in modern day Russia;  as well as Birka in Sweden; Kaupang in Norway and Hedeby in Germany (then Denmark).  Trades routes stretched at least as far as Constantinople (Istanbul - then called Mikkelgard by Vikings) and Jerusalem.

72. Skipton was named so by Vikings as the sk sound was easier to say.  Before then it had been Shipton (literally ship-town).  Most sk words are Viking like: skim; scatter, scab, screech, skirt, skill etc.

73. Vikings loved to trade insults ... in a friendly way!

74. The traditional Northern greeting "'Ey up" is Viking!

75. It is thought that slaves may have been named after physical features or the task they typically performed.  We won't give examples for fear of offending!

76. Homes could be made warmer by digging a pit over which they were constructed.

77. Young children's lives were determined by their parent's status, so a child of a slave would automatically be a slave.  However, a strong meritocracy meant that in adult life both wealth and status could be attained.

78. We are still discovering hoards of coins today, believed to have been buried in panic after the Great Viking Army invaded in 865 AD.

79. Vikings used an outdoor privy, enclosed by wattle and wiped their bottoms with sheep's wool, moss ... or similar ... usually.

80. Wood was extremely important one thousand years ago.  Timber was traded for precious metals; Vikings believed that the fabric of the universe itself was held together by the World Ash, Yggdrasil, which connected the Nine Worlds; longships were made of light oak with a heavier pine mast, deck and oars; longbows were made of yew and arrows of birch.

81. Viking economies were built on precious metals.  Coins meant little to Vikings other than being valued by their weight and were used as bullion, often melted down to become ingots or jewellery.

82. Vikings made soap from Conkers and if you book a Viking Visit, the children will have the opportunity to handle some!

83. Modern evidence of our genealogical roots is clear in the difference between accents and language usage across the division of the A5.  In Anglo-Saxon times, this was (and still is) known as Watling Street.  An old Roman road, it later marked the border between the Danelaw and Alfred the Great's Anglo Saxon kingdom.  There is just a stone's throw between Nuneaton and Hinckley, near where we live and it is very noticeable.

84. Coppergate (literally Cup Street) in York was where cupmakers carried out their craft and trade in Jorvik.

85. Believers in the old Norse religion made bronze statues of Thor, holding his hammer, the mighty Mjolnir, with which he made the thunder and lightning.

86. Life was bound by the seasons and it was said that "the ploughman feeds us all."

88. Many placenames owe a lot to Old Norse.  Thorpe meant settlement; thwaite, a clearing for pasture; wick, a harbour; dale, a valley; garth, an enclosure and beck, a stream.

89. Vikings drove the Picts and Scots from Northern territories and Knorrs full of whole Norse families populated the areas.  Some men married local women and set to farming the land.

90. William the Conqueror was the grandson of Viking king Rollo.  So Normans were two generations removed from being Norsemen.

91. Bifrost was a rainbow bridge which connected Asgard to Midgard (Earth) and can still been seen on rainy days when sunshine follows!

92. It is difficult to reconstruct any consistent conception of the Viking trading and bartering culture and it varied between countries and settlements.  One fragment of evidence suggests that a big, strong male slave was worth about twenty four cows though whilst a female was worth about eight.

93. Wrestling was popular, for recreation, for more serious sport (which could turn nasty!) and sometimes to settle disputes.

95. After a just divorce, men were required to pay their ex-wives maintenance payments.

96. The lawspeaker read out all of the society's rules at the annual Althing so that even illiterate people would know right from wrong.

97. First born girls (and sickly babies) were probably killed or abandoned in hopes of conceiving a son.

99. Valkyrie were the choosers of the slain on the battlefield and then hand maidens to those that made it to Valhalla.

100. All of following could feature in the Viking diet: seagull; horse; seal; moose; whale and walrus.  I think I'd give any of those a go over their fish head soup!

101. At mealtimes, tables and stools were setup.  Many would eat on their laps though.  Knives and natural forks were used - fingers!

Content on our site can be reproduced for educational purposes. 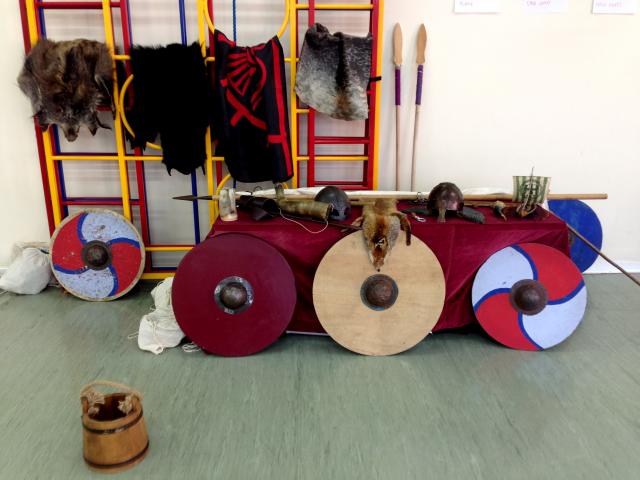 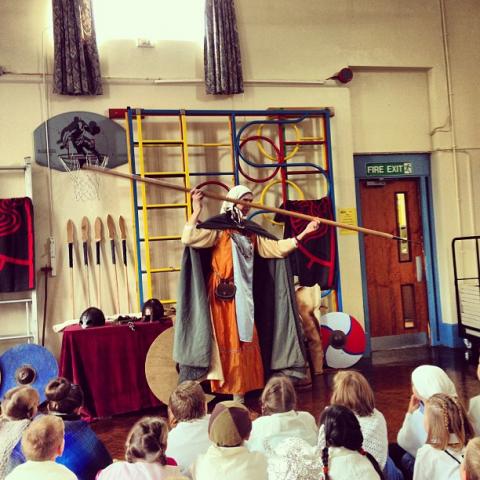